The following is the beginning of a memoir written by Carolyn Rose. My father-in-law found it recently and passed it along to me. I have typed it directly from her manuscript that was written on blank ‘Welcome Wagon’ hostess forms. Additionally, we estimate this picture of her, taken in her very modern kitchen for a USDA article, dates from the late 1930’s. We hope you enjoy the glimpse into the past as much as we have.
-Nancy Rose
Carolyn Rose 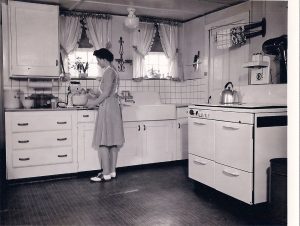 The Saga of Red Apple Farm
By Carolyn Chaffin Rose

In the beginning was the house – and the orchard. He said, “I’ve found a farm and orchard that I like, will you come to see the house?” We drove to a small town in northern Worcester County, down a narrow dirt road lined with huge old maples and there was the house.

A big old 1790 colonial type house with clapboards half off, an overgrown lawn, a few privet shrubs scattered around greeted me. Out back was a huge old barn and a few small buildings. Then we peeked in the windows of the house and there was a large old fireplace with dutch oven and paneled cupboards above. That really sold me the place. I could just see all the wonderful possibilities. We were young, just out of college, had always lived in the city, but we had the courage – or something!  That year before we were married we spent every weekend along with several relations who liked getting out in the country, tearing off wall paper, filling cracks in the wooden floors, papering and painting. The windows were 4 panel, poorly fitted so we changed them to 12 panel. There was no plumbing only an iron sink and pump in the summer kitchen. No electricity, the town only got electricity that year of 1930! So we installed a furnace and electricity. The well outside had gone dry that year which meant drilling a water supply.

After our wedding in August we moved in- with plumbers still working. For 6 weeks we cooked in wood stove until electricity finally was put in up the road. Oh, the kerosene lamps, were we happy to change to electricity! It also meant no outhouse and we had running water.

With relatives still coming weekends, we struggled with a lawn, put in gardens and roses around the grey stone walls. A coat of white paint on repaired clapboards plus blinds fitted to the windows (these discarded by relations) really makes the house look quite respectable.

My husband was pleased with his orchard of 500 trees and in these days of the depression, they didn’t produce nearly enough apples to make a living. He bought a work horse to pull the old spray rig left here. [That old horse had ways of his own. One day he ran off, finally ending in the barn, going through the old floor. It took the neighbor and a block and tackle to get Roxie out of that. After 3 or 4 years she died and my husband bought a home made tractor built from a Model A truck.] An old Oakland truck was in the barn. This had Red Apple Farm written on the side and so we named the farm. This was our equipment. A few hens purchased, supplied meat and eggs. Someone gave us a couple of Guinea hens which made the worst ruckus sounds every morning, They finally flew too far and we fear the fox that walked by across the street in the field every morning had a meal.

We put in gardens, but lost much of the vegetables when the deer came regularly and ate the rows down to the roots. Pheasant and partridges were always about. We were really in the wilds with no neighbors for ¼ of a mile. What fun though to find wild strawberries in the orchard, about five kinds of grapes growing in the many stone walls and blueberries in the pasture – all our own. On the 37 acres there were walls where lady slippers, laurels and many wild flowers were growing.

Along came two children, a boy and a girl. They enjoyed the country living with plenty of space, cats and a dog to play with and friendly ponies to ride that were given us. We acquired ducks and geese at several times but these turned out to be a nuisance, we gave that up. The English Setters had pups regularly every year. This kept us busy with 8-9 pups to feed three times a day but they were adorable.

During the war my husband decided to have goats for milk. I really didn’t think this was the answer, but if the milk was fresh and cold we all seemed to like it. Finally, my son wanted a calf for Christmas. That was the beginning of Elsie, a great big cow who scared me when she rolled her big limpid eyes…